Last year saw the league make 12 trades. A little more than a third of the way through the 2016 and we have already matched last season’s generosity. However, 4 trades have been killed by a league veto, with most of those veto’d deals getting thank you’s from the party on what is widely viewed to be the “losing” side. My view is this: Do your research. Don’t propose a trade in between bong hits until you are sure it’s the right move for your vision of your roster. The standings are tight right now, next month’s rent is on the table, every move is going to be under the microscope. Ask yourself, if I get fucked up in broadripple and harpoon moby dick – am I going to feel secure enough to then present her in broad daylight to a jury of my peers? Maybe she has a great personality. Maybe she’s rich and likes dabs. Maybe you’re just into large black woman. That’s fine, but just be ready to stand up for your shitty trade with reasons other than “The Brewers are my favorite team now”. Also – the veto isn’t meant to be wielded as a safety net for dumb ownership decisions. It is an anonymous checking mechanism and should only be used when it is clear that the competitive intentions of a participating trade party has been compensated.

So from now on if you’re going to hit the ‘propose trade’ button, be confident you can look in the mirror the next day believing that putting a ring on Laquanda’s size 15 finger for the next 12 weeks is the right move for your team.

The most controversial figure in fantasy, Timmy and the Minnesota Twaints haven’t won a matchup since week one. The reason? Bottom in the league in Long Balls, RBI’s, ERA and WHIP. All strong predictors of success. And yet somehow, the Twinks are only 13 games back of the division. Little Timmy has already pulled off one credible trade on his journey from the bottom of the well, that is assuming Chris Archer regains form and Ryan Braun stays healthy (Both if’s, the latter a borderline touch of Jesus). After the recent Matt Harvey, Joey Votto, Jacoby Ellsbury for David Price trade was shot down by the league, I now worry about Tarrell going into the Castleton Mall shouting “Allah Akbar” and trying to hand Mike Trout to the closest stranger. That is until we veto it. 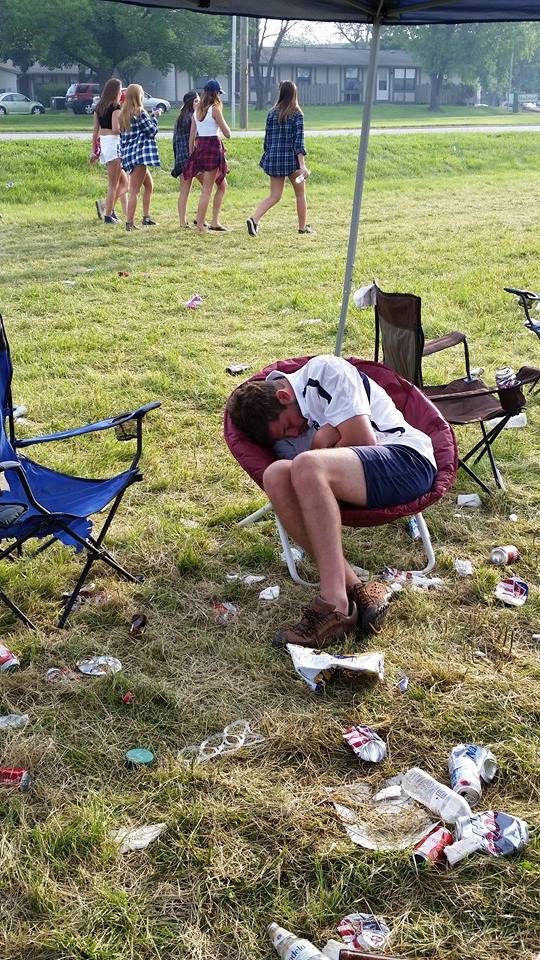 Maybe because I’m not in Witchger’s league as a scholar or intellectual, but I can’t figure what Carpenter Bruce Kershawing means. Maybe it means something, maybe not. I will say it beats the hell out of Team W though and if it makes Peter laugh, it makes me laugh. Witchger and his horde of closers quietly went 3 weeks without a matchup loss before last week’s setback. Miggy is on fire. Offense is still humming along. Kershaw is Kershawing anything and everything. Not quite enough to consider a nod at 8, but enough to keep the Twinks in the cellar for another week. Tulo’s inevitable DL stint is upon us and although presumably not serious, it does leave a bruise on Wasky’s hope for relevance. Didn’t get to see Witchger swallow a beer this weekend.. or even wrestle anything, which I have no choice but to factor into this rating.

It gives me great pleasure to see a man of such distinguished lip foliage bounce back from a 2-10 week with a performance like Purd had last weekend. Officer Steve was a broken man discussing his fantasy hopes the previous Saturday but now, new life. Carlos Gomez to the DL was a mercy kill. This is a stronger lineup without him right now. Justin Upton’s ownership is down to 80%. Feels like I’m talking about the same thing every week but if he ever gets contacts, I’m buying. I think about Mookie Betts more these days than my ex girlfriend’s great boobs. He is a freakshow. Nolan Arenado is another supernova that will keep Jung Ho within a few laps of contention. I still wish there was a little more depth on the staff. A blue chip prospect like Tyler Glasnow would have been a nice addition. Oops. Keep chuggin Purd.

The Fighting Moles dropped hard in the rankings and are in the midst of severe offensive drought – with 7 every day bats hitting under .200 over the course of the last 2 weeks. This won’t continue, of course. It can’t. But when is it okay to start worrying about Giancarlo Stanton as a fantasy anchor? Between his waining health and Ruthian K Rate, Stanton’s status as a bonified top 10 player has to be called into question eventually. Who needs Dee Gordon when you have Jonathan Villar? A near perennial 40 steal talent in the minors, he’s on pace for more thefts than TJ shopping for discounts at a poorly surveilled convenience store. Excellent pickup. Can’t stress how small the margin is from 7 to 3 in these rankings. If you can survive the sweaty hell hole that is the Snake Pit while getting intimate with a water bottle of hot whiskey, we should expect to see our Uncle on the other side of this speed bump.

No team has ascended faster than Dobis in the last two weeks. The last time I dropped rankings we could see this storm coming. Now we’re Dwayne “The Rock” Johnson trying to fist fight a tornado (Haven’t seen San Andreas yet). It’s nice to have one player go 10 consecutive games with a hit. Having two players ride adjacent hit streaks of 25+ games is like getting a great footjob (Xander Bogaerts and JBJ). It just doesn’t happen. Three weeks ago, Skinny Pete was one week away from taking Dobis PR out to the woodshed and finishing the job himself. Now Dobis is 2 games from the top of the division. Which is why I fully don’t understand the decision to blow things up right after hitting the shortcut turbo ramp on the 2nd lap. No disrespect to an ace, David Price, but if the veto rules had been changed beforehand – All of Matt Harvey, Joey Votto, and Jacoby Ellsbury would be on another team right now.

Again, very close call here. The offense is riding Hurricane Cargo and his decimation of the Cincinnati Reds pitching staff in Coors. 4 consecutive games with a home run, 5 in his last 6 games. There’s no place like home for Carlos. Paul Goldschmidt is in the process of raising his average 80 points. Nomar Mazara is littering second decks with baseballs. And I’ll be honest, I didn’t see Gregory Polanco developing into a top 15 outfielder this fast. Not the team you want to play right now.

Glad to have our Big Bear back from across the pond. At least until the wind spirits call him to his next journey. The bats not named Kris Bryant, Ian Desmond, or David Ortiz have regressed some in the last two weeks. At least from a contact perspective. Even Bryce Harper has looked fallible lately. How David Ortiz is leading the MLB in RBI’s at an age when he should be playing in our slow pitch softball league is beyond me. The pitching staff continues it’s excellence, as it should. The West should take notice… Malvey is going to be tough to uproot from that 4th playoff spot.

I’d look like a pretty big asshole with the name Team Sabermetrics if I wasn’t in first place at least one week, right? Offense has been fine. I’d like to see a little more consistency from some of my marquee position players. I built my team around steady production and roster flexibility. If/when Correa and Jose Abreu turn it on, I’ll start winning weeks 8-4 instead of 6-5. I can’t pretend like I have the team I had last year but I’d argue for my pitching staff as the most talented top to bottom in the league (Your minor leaguers have more value before their first start). I’m fortunate to throw out four top tier strikeout savants in Scherzer, Strasburg, Kluber and Yu Darvish. If their home run per fly ball rates ever come back down from space, no one touches me in week to week starting potential. Fucking Klubot has given at least 3 mexican league players their first career home run. I know better than to trust my fantasy luck but I have a roster built for the rock fight taking place at the top of the WEST division. Look out for one more holographic card in my Yu Gi Oh deck. Byron Buxton if you swing at one more 2-0 slider in the dirt……………..

After the conclusion of the draft, I wrote in one of my long lost fantasy memoirs of Orbit’s Woody’s high probability to lead the league in average, runs, and steals. Through 8 weeks Bower is tops in runs, second in steals and a sizable lead on second place in average. What I didn’t see coming was the power. And as far as I can tell, it looks sustainable. This is the best offense in the league right now, really no ifs ands buts or boners about it. A few good Chris Archer starts and Zach Greinke is probably attainable in a one for one. Assuming Ryan Braun gets hurt, we may look back on that trade as a wash. If it’s me, I save him for a package with a lesser pitcher to chase a similar return. Forgotten in the Greinke trade is Carlos Carrasco. A healthy Carrasco paired with a born again Dallas Keuchel would go a long way to forgetting Chris Archer and his sexy keeper value.

Yes, yes, we have a new number one. Presenting, the Bobfather. The one true heir to the Cook empire. If it weren’t for his love of booty we might be tailgating the 500 out of my rusty gold pickup truck. Praise be, praise be. Short and sweet because O’Hara is going to text the group again soon. Jose Fernandez is an absolute ace. Lester is on the next tier. Tanaka one below that. After that, I don’t know. And yet CMD keeps putting up these ridiculous pitching weeks. The Zika Virus is nipping at the offense too. The bench has gotten dangerously short. I wonder where McCutcheon gets drafted today. Not in the top 10. Top 25? Going to need the stars to step up if CMD is going to hold down number one. Judging by my tone you can tell I will be surprised if Cubs Mascot Dong can sustain this ridiculous pace under the current circumstances. Not, “My kid just fell into the Gorilla pen” surprised, but if I will definitely have an apology piece ready if CMD is still batting 30 games above .500 in four weeks.